the gorilla and the monk 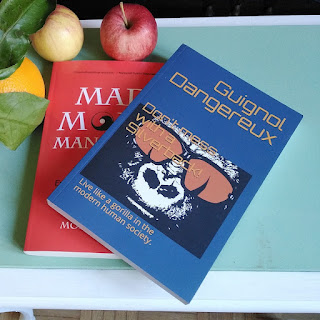 when browsing amazon and looking for books, have you ever noticed that "frequently bought together" box that appears under the details section? well, i noticed that my book #DontMessWithASilverback is frequently bought together with the book of Yun Rou, a daoist monk. so i thought, what the does my book (and my views and my ethics) have in common with the one of a daoist monk? i got curious so i bought the "mad monk manifesto".
to tell you the truth, after reading the first part of the book i was quite surprised by the fact that, despite the big difference in our attitude (Yun Rou's eastern tradition and mysticism and my strictly biologic and agnostic views) the author delivers a message very similar to the one i try to deliver in "don't mess with a silverback". we both advocate veganism as an ethical choice, we both suggest reducing the impact of technology on our life and trying to live according to the laws and the rhythms of nature.
in the second part of the book the discrepancies become easier to spot. the main difference is that monk Yun Rou has an optimistic view on human nature. he exorts developing the traits that are exclusively human like spirituality, creativity and arts. on the contrary, i consider humans as primates with too much spare time but not enough intelligence to use it wisely. there are also a few things that i really don't like in "mad monk manifesto". the author condones buying and owning exotic animals as pets as long as they're born in captivity. he condones even killing feral cats if their presence alters the balance of an ecosystem, but finds unacettable sterilization. he says that during a hike in the wild he noticed an anteater "following him like a dog", but then he shot it dead when the expedition leader directed him to do so saying that he was horrified by that... but what the fuck? was he ordered to shoot it under the menace of being killed himself if he wouldn't obey?
to sum things up, did i enjoy this book? hum, no, not really. would i recommend it to someone that has already read my book? well... no. still, i bought it out of curiousity and i'm actually happy to have read it, so the next time that the "frequently bought together" amazon box pops up, i know what it's about.
Older Posts Home
Subscribe to: Posts (Atom)