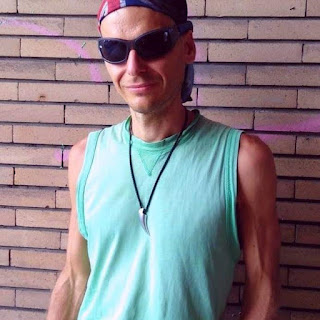 i spent a big part of my life as a musician. i played the bass guitar for years, then i started making electronic dance music and became a techno producer (my discography is still here if you're curious).
after being vegetarian for years, in 2007 i decided to go vegan for ethical reasons (for the animals). i had no idea of the effects it would have on my health.
at the time my lifestyle was anything but healthy, i spent so many nights partying hard, and often DJing was just an excuse for the afterparty.
since the first days of my new vegan lifestyle i noticed how detrimental stereotypes are. vegans are mocked as pale and thin creatures with no balls.
i decided to fight back this stereotype and started working out. at that time, despite my bad habits, i looked reasonably fit because in my life i've always walked and cycled a lot, but i wanted to grow muscles too.
i started with bodyweight and crossfit workouts, then i discovered the incredible world of the so-called underground fitness and its unconventional workout routines (flipping tires, swinging chains, that type of stuff) and started practicing martial arts and endurance sports.
at the same time, i started studying and experimenting on myself the relationship between food, health and physical performance, and i went from a trashfood vegan diet (lots of chips, veggie burgers, beer) to an almost-raw frugivore diet (fresh fruits, leaves, roots, seeds).
in a very short time my body transformed, lean muscles grew everywhere. mind that it happened when i was in my late 30s.
in 2016 i decided to write down the results of all the experiments i did on my own body and to compare my diet and lifestyle with the habits of other primates. the goal was to investigate on the physical, behavioral and social nature of modern humans, to verify if the way we live in the XXI century is still suitable for our species.
the result was the book "don't mess with a silverback", firstly published in 2017 in italian and translated in english in 2019. it's available here.
nowadays i spend my free time running, cycling, crawling, climbing trees, hiking with my family and fighting in the dojo.
i still make music when i'm asked, usually scores and sound-design stuff, and i'm always ready for a good busking session!
Home
Subscribe to: Posts (Atom)