pros and cons of unspecific training 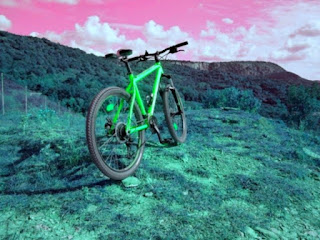 the sun was high in the sky and a refreshing breeze was gently blowing. it was a wonderful day of late spring and i was happily pedaling uphill in one of the most enjoyable bike paths of my area. i wasn't alone, plenty of people were riding their mountain bikes. i was pushing quite hard on the cranks, but still it seemed that i was one of the slowest cyclists on the path. i looked fitter than most people around but this wasn't enough to prevent an evidently overweight guy from passing me, followed a few minutes later by a man looking like he was in his 70 or even 80.
why was i so slow? i wasn't out of breath and my legs were working properly, at least according to my feelings. the answer is quite simple, and everything became quite clear when i noticed my outfit and the one of the other cyclists: i was the only one wearing a cotton t-shirt, a normal pair of shorts and basket shoes, while all the others were parading with their technical outfit. and no, obviously it's not the difference in the outfit that was making me so slow.
the fact is that i was just a man pedaling his bike, while the others were cyclists. they were training specifically for that. i wasn't. i've always followed a workout regime that is the total opposite of specificity. following an unspecific training routine means working on all aspects of general fitness, which means cardio, strength, resistance, mobility and coordination. this routine is quite popular in the field of martial arts, where all-body functionality is crucial. still, if i wanted to improve my cycling performance i needed to revise my workout regimen, dedicating more time to specific training.
oddly, my endurance was ok, what i actually needed was working on speed and on the pedaling efficiency. i did it and it worked. nowadays i can't call myself a fast cyclist (quite the opposite to be honest), but i'm not the slowest around anymore.
but going back to that day of late summer on the bike path, i suppose that all the cyclists passing me on the bike path weren't able to do the number of pullups i do. and possibly i was quite decent as a  cyclist among the martial artists and the bodyweight athletes that usually train in the local park.
that's it... the pros and cons of unspecific training.
Newer Post Older Post Home