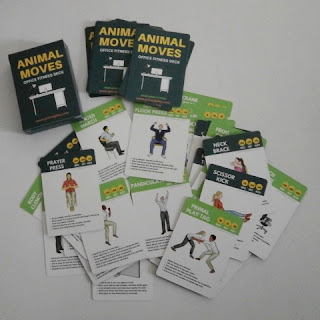 i'm not a big fan of table games, usually there are too many rules to learn and to memorize for something that is supposed to be just fun. nonetheless, i know that many card games have expansion kits.
something similar goes with Darryl Edwards' animal moves deck that i reviewed some time ago (here's the post), there are some additional cards that can be purchased through the site primalplay.com. a deck is dedicated to kids and another to desk job workers that want to maintain a minimum level of movement even during the long office hours.
this post is focused on the animal moves deck office edition. i had the chance to have a closer look at it as i bought it as a christmas present for my wife who, although not having a typical desk job, happens to spend many hours sitting. the concept is exactly the same of the original deck (you shuffle the cards, take one randomly and do the exercise that is well explained on the card itself) but in this edition the exercises are conceived to be made in most cases without the need to leave your desk and even without any equipment, and they can be easily performed wearing a regular office suit. the idea itself of breaking the long hours spent sitting with some exercises is backed up by some strong scientific evidences: it is proven that even a little bit of movement every hour or so can make a big difference in terms of general health and fitness. obviously the exercises are not hard and demanding but doing them through the whole day will help keeping your back free from pains and your muscles toned.
exactly as in the animal moves original desk, there are some games that can be done with the cards, but in my opinion going randomly is the best way to use this deck. just pick one or two cards every 20-30 minutes of the time you spend at your desk and do the moves. probably you will not see your muscles growing or you won't loose all the fat you would like to, as it would happen with a regular workout routine, but surely you'll feel a lot better after the long hours spent at your desk and your overall health and fitness level would be much better. plus, you will break your work routine having some fun. and in my opinion the idea itself of something simple as a card deck that can become so precious for so many people is just brilliant.
Newer Post Older Post Home