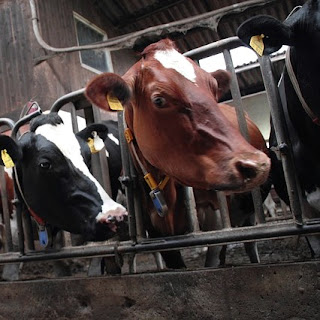 while the whole world is worried for the spreading of the new corona virus, something much more dangerous is jeopardizing the future of the mankind, and it's something that has to do with antibiotics and the animal products industry.
we all know that antibiotics are largely used in the farming industry, but not everyone considers the severe impact the same antibiotics have on human health. farm animals, due to the poor conditions they are forced to live, have to be treated against infections quite often because of self-mutilations and wounds caused by the continuous contact with the cages, stress, overpopulation and lack of hygiene. by consequence breeders, in fear of loosing their investment, make extensive use of this class of medications. if just one animal gets ill or gets an infection, then all the animals of the same holding undergo antibiotic treatment. in many cases antibiotics are administered as prevention too: as it's highly likely that farm animals get ill during their short life, they are constantly kept on antibiotics.
these habits have two major effects on human health. the first one affects just the consumer of animal products that will eat some antibiotic and some hormone at every meal. obviously being constantly exposed to some doses of medication, especially if not needed, isn't good for our health. the second one is even more serious, as it affects all of us independently from our eating habits and represents a real menace to the survival of our species.
basically, the fact that livestock is treated daily with high doses of antibiotics does not exclude the fact that in the farming facilities large amounts of pathogenic bacteria are able to live and prosper. these bacteria are in constant contact with the livestock, but since the breeder administers piles of antibiotics, for a while nothing happens: bacteria are defeated by the medicines and the animals don't get infections. but as all other living things, bacteria evolve and adapt, developing some techniques to survive in a given habitat. generation after generation they become stronger and more resistant to antibiotics. so after a while antibiotics become useless: farm animals, even if treated with high doses of medication, have no defense and even a simple infection can lead them to death. but the same bacteria that affect animals (and that learned to resist against antibiotics) can attack humans and the antibiotics used for the livestock contain exactly the same active ingredients used for human medications. so if a human comes into contact with bacteria that learned to be antibiotic-resistant, the antibiotic treatment will be useless and she will be completely defenseless against even the simplest kind of infection. this means that in just few years we may find ourselves back in time to the pre-antibiotic era, when it was possible to die just for the consequences of an infected wound.
antibiotic resistance represents one of the most severe menaces for human health. it's not discussed that much but the available data are alarming: since scientists started to study the phenomenon, only in italy more than five thousand people died because of infections caused by antibiotic-resistant bacteria. a research done in 2014 reveals that more than 12 percent of chicken meat available on the market is infected with salmonella, and over 80 percent of the salmonella bacteria proved to be antibiotic-resistant. despite this, the amount of antibiotics used in the farming industry isn't decreasing: it's calculated that more than 70 percent of the antibiotics produced in the world is used in factory farming facilities.
when antibiotic-resistant bacteria will evolve and become able to spread through human-to-human contagion as they do now with animal-to-animal contagion, we will be forced to face pandemics caused by pathogens that nowadays don't represent a menace anymore. ironically, it was the same discovery of antibiotics that contributed to double our life expectancy over the last century. in just few years, this advantage may be canceled. the reason for this debacle lies in the insane, dangerous and unhealthy habit of breeding animals for food supply. the consequences, in this case, will come down to all humans, including those following a plant-based diet.
mind, the first sentence of this post does not mean that i am underestimating the effects of the spreading of the new corona virus: there's a lot of people that, for a reason or another, find themselves with a weak immune system, and we have to protect them doing our best to avoid the spreading of the disease. similarly, i'd like meat eaters to do something (obviously, stop eating animal products) to protect all of us from the consequences of antibiotic resistance.
Newer Post Older Post Home