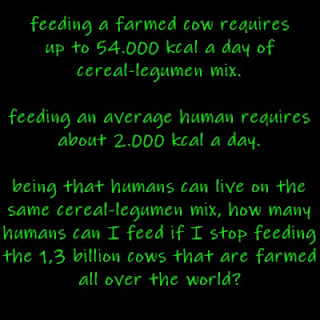 tomorrow italian people will celebrate the national stop food waste day. statistics say that every italian citizen wastes about 36 kilos of food every year. many people consider it to be a lot, and actually it is especially if we think of the areas where global hungry is still a problem.
still, that's just a small portion of all the food waste that happens daily in every corner of the world. the fact is that most waste happens way before the food arrives on the shelves of the supermarket when consumers finally buy it. it's a matter of choosing the way we want to feed ourselves.
in modern times, humans choose to use the largest part of the resources they have at their disposal for feeding animals they enslave and kill in order to convert them into another type of food. but let's focus on some data: a dairy cow drinks 200 liters of water every day and requires a high caloric intake (from 12.000 to 54.000 kcal daily, depending on the zootechnical schedules). an adult human being needs just an average of 2000 kilocalories to stay healthy. so it's quite obvious that the food used daily to feed a single cow is more than enough to nourish and maintain in good health a number of humans from 6 to 27. now let's do the math. the total number of cows farmed all over the world is well over 1 billion. by consequence, the simple fact of quitting rearing cows would generate a food surplus that could satisfy the nutritional needs of a number of humans going from 6 to 27 billions. given that nowadays world hunger affects less than 800 millions people, the solution to this longstanding issue would be easy. using the resources that are currently used to rear cows to feed hungry people would solve forever the problem of world hunger.
yet, most humans prefer to turn forests into desert to produce food that will be used to feed abused and exploited animals whose meat will make obese a part of the global population and clog their arteries. at the same time another part of the global population ends up being undernourished and expropriated of the soil and the resources that could be used to satisfy its subsistence needs.
the objection I often hear on this issue is that the whole line of reasoning falls short as humans cannot live eating grass like cows do. well, actually farmed cows would like to eat grass but the breeders, in order to speed up the growth and the increase in weight, feed them with a mixture of cereals and soy, a high-energy and protein rich food that could be used to feed humans in each stage of their life.
so, celebrating stop food waste day remains a good idea, but what about doing something concrete for it like removing all animal products from our diet?
Newer Post Older Post Home