a gorilla view on fridays-for-future 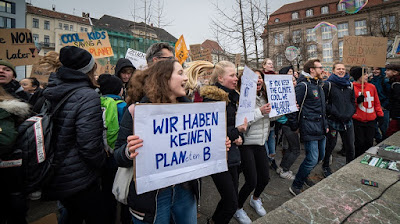 even if you don't spend your entire life on social media networks and you never get involved in online debates, it's almost impossible to ignore who greta thunberg is and not to have an opinion on the so-called fridays for future (the protests that take place every friday in many european cities). it's great to see so many youngsters interested in protecting the environment and fighting climate change (well, actually it should be logic, as the youngest generations are the ones that may be more affected by climate change, but logic isn't always easy to find in human behaviour). and it's also great that greta thunberg, for certain things, is becoming a living example of coherence of ideas and actions, as for the fact that she always travels by train to reduce the impact of her journeys. it isn't that great that she rarely talks straight about the human activities that are most detrimental to our environment and that represent the main cause of waste of resources (and obviously i am referring to breeding and to the production and consumption of food of animal origin). i cannot stress this enough, turning the tap off while we brush our teeth makes no sense when producing what we have just finished to eat has required an amount of water comparable to what is needed to fill our bathtub for fifty times (and here i am referring to an ordinary steak that many of our conspecifics are used to eat).
oh well, it's great anyway. greta and her followers aren't perfect but imperfection is part of our nature. is there any political or ideological movement with no discrepancies at all in the history of mankind?
in my opinion, the real problem lies elsewhere. the real problem is the target of the protest. asking the governments to make something to protect the environment and to fight climate change means not acknowledging the power we have as consumers. whether we like it or not, we live in the consumer society and its rules are written according to what we put in our shopping basket, not following the whims of heads of state. even without a precise intent, consumerism has generated a form of direct democracy that our species has never experienced in its history. and it's wonderful, but it has to be recognized and used to reap all the benefits it can provide. if the vast majority of us really want to live in a less polluted world, all we have to do is giving up eating meat and animal food, reducing as much as possible the use of motor vehicles (electric-powered vehicles included, as producing electricity requires some resources too) and avoiding every form of waste. and that's the point where i feel i must criticise the fridays-for-future movement. protesting against governments makes the single consumer feel less responsible of her/his actions, so she/he feels allowed to carry on with all those habits that represent the biggest menace to the environment. at the same time, she/he can blame donald trump and the other governments for not taking action to save the planet. let me make it clear: in this context politicians don't mean sh*t. it's up to the masses to choose the future of the planet. we should learn to target the way we spend our money according to our ethics and our wishes, and do it on a daily basis.
still, ignoring our own responsibilities, blaming the government and taking to the streets every friday is easier. easier but useless. just another cheap and effortless way to clear our conscience.